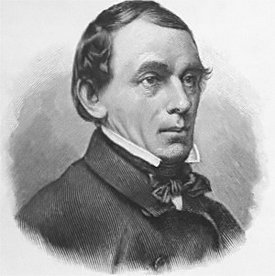 Rudolf Hermann Lotze was born in Bautzen on May 21st, 1817. Lotze was a philosopher and logician; he also had a medical degree and was versed in biology, psychology as well as physiology. He studied at the University of Leipzig, and then moved to Göttingen, succeeding Johann Friedrich Herbart in the chair of philosophy. With the publication of his monumental Mikrokosmus, and the two-volume work System der Philosophie, Lotze became the most important and influential thinker of his generation (the one recently described as late German idealism). His alleged influence on Frege has long been the topic of harsh debates (like the one between H. Sluga and M. Dummett on the objectivity of thought and the origin of the so-called analytic philosophy); his importance for the early Husserl, as well as for Heidegger, is well known and undeniable, like his influence on the neo-Kantian tradition (from Rickert to Windelband, Natorp, Bauch and even Emila Lask). According to Sandor Ferenczi, during his late psychology lectures, Lotze also anticipated some of Freud’s key insights (like the notion of unbewusste Vorstellung). Lotze was a “systematic” thinker, perhaps the last philosopher really to consider the system as the one and only possibility to grasp rationally and understand the world as a whole.

As shown by the recently increased number of publications on Lotze and his philosophy (see for example: Late German Idealism. Trendelenburg and Lotze by F. Beiser (2013), the monumental Hermann Lotze: An Intellectual Biography (2015) by W. Woodward, and the anthology of essays on Lotze et son héritage. Son influence et son impact sur la philosophie du XXe siècle (2015), edited by F. Boccaccini), the interest in this still partially unknown thinker is growing.
The present call for papers would like to contribute to what might be labeled Lotze Renaissance; topics would include:

Contributions can be written in Italian, French, English, Spanish and German, and sent to:
desantis_daniele@yahoo.it; danilomanca30@gmail.com